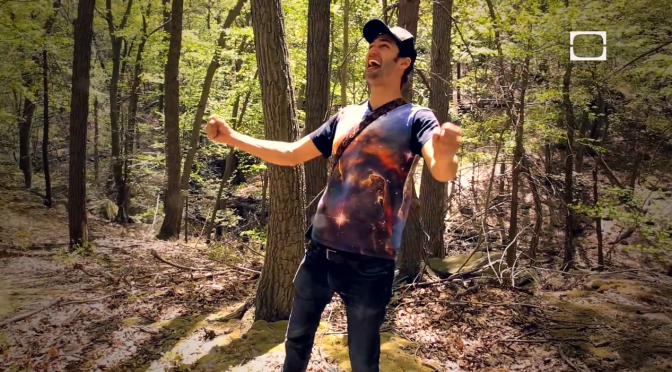 How Do We Break That Cycle and Start Livin Life?

(Hint: The Answer is Doing Something You’re Into ;))

Watch these videos to get jumpstarted.

Let’s get this party started, with Jason Silva – Awe.

When we talk about Livin That Life, we’re talkin about the type of life filled with Awe. Awe-some-ness. We all want our lives to be Awesome! But what is Awe, and why do we crave it so much?

“Awe is that pure ecstatic connection we feel to wonder and infinite ecstasy… a bursting of the senses…. a feeling of radiant pure aliveness… being completely ravished emotionally.”

The problem with humans, says Jason Silva, is our tendency to fall into mental habits.

But the consequence of that, is a phenomenon known as hedonic adaptation.

“Over stimulation to the same kind of thing, the same stimuli over and over again, renders said stimuli invisible. Your brain has mapped it in it’s own head, and you no longer have to be engaged by that. You have eyes that see not, ears that hear not, and hearts that neither feel nor understand.”

Personally, I can’t stand doing the same thing day after day. I get bored very easily. My body needs awe. I feel it. That’s what Livin That Life is all about. This video will get your senses electrified… Give you a little feeling of that awe that we are after.  Hopefully it reminds you to keep chasing awesomeness.  The world is really infinitely awesome and incomprehensible.  This is a constant reminder to remember what’s really important. This video will jumpstart your imagination and get you realizing what’s really possible. Watch all of Jason Silva’s videos for that matter, they’re called Shots of Awe… This one should have 20 million views in my opinion, so be sure to share this page!

Eugene Hennie – How to find your passion.

Break free. Remember what you loved doing as a kid? Your imagination was running wild.  It still is, but it’s just suppressed because we ‘think’ we’re not supposed to act like kids anymore. Go do awesome stuff.  Become an entrepreneur and make a sustainable business out of it.  With the power of the internet, its easier than ever.  What I think the quote to the right really means is, don’t get trapped in the system of hedonic adaptation that we just learned about, but what I really take from it is this: You should grow and mature and evolve and constantly learn and get smarter always, but, DON’T FORGET THAT YOUR INNER-CHILD NEVER GOES AWAY. That inner creative imagination and endless awe. A child’s mind is open, so wonder and awe can flow in.  Get goofy people!

How to Know Your Life Purpose in 5 Minutes: Adam Leipzig – A MUST VIEW.

At his high school reunion, he found that 80% of people were not satisfied, with their lives! With their LIVES?! That should definitely catch a young person’s attention.  He goes on to say that the 20%  – the happy ones – ALL had something very simple in common –  who they are and what they do is defined by how they help other people.

Sell Your Crap. Pay Your Debt. Do What You Love.:  Adam Baker.

He realized after his first kid that his life had boiled down to just having stuff. What to upgrade next? The kitchen table or the couch? The refrigerator or the TV? I don’t know about you, but these kind of stories FREAK. ME. OUT. lol. I think my biggest fear is getting stuck in a life of boredom and pointlessness. But the awesome thing is, Adam realized the scripted path his life was going down, and he said F-ck it.  He did what most people won’t and decided to leave it all behind and taking my wife and 1-year old kid around the world. He did it. Very inspiring, and a reminder to young and old people alike to not forget about what really matters.

“Identify the perfect lifestyle, then work backwards from that.”

I really fucc wit this guy. His financial plan was very similar to mine after college.  Work hard and fast, make a million bucks, then… BOUNCE! Long story short, he realized that he should just bounce anyway, and outsource and virtualize his business so it could be run it from his laptop. This video confirmed by inkling that I should just bounce and start traveling as well, before I get rich, and build an online business that can be ran from anywhere.

For Colin, the simple idea of carrying a camera wherever he went sparked the creative and inspirational chain reaction that led him to live the crazy awesome lifestyle he lives today.

I had been dreaming of the idea of the lifestyle experiment for a long time, I just didn’t know it – the life of constant change awe and excitement and new emersion experiences, meeting new friends around the world – all while CREATING awesome stuff at the same time.  This is what I was after.  Gain as many new perspectives on the world as possible, and make cool shit about it.  After all, this world is the most amazing one we know of

.. In fact, I truly believe that as Earthlings, alien inhabitants of a superstable heavenworld, it is our duty as life-beings to explore every last corner of it. It’s that special. A true miracle that it even exists. This guy gets it.

How to conduct your Extreme Lifestyle Experiment:

“Everybody should do this, because if you’re not looking at life through multiple standpoints, and then making changes, you’re insane.” – Colin Wright

Yet another awesome ‘break-free’ success story. He woke up to the realization that what he was conditioned to do, wasn’t his passion. The key: he did something about it.  Ikenna was living like this picture: on a treadmill. He realized that law just wasn’t his passion.  The key was he actually did something about it. He quit and got online. Traveled. Started making videos about his passion.  Amen to you, brotha. We’re right behind ya.

Again, he had a great job.  He admits, sometimes its so tempting just just call it, ‘all good’.  Great salary, pension, benefits, all that. But the reality is, and I can relate to this in my corporate experience, is that corporations are designed to pay you just enough that you won’t leave, and not too much that you slack off, always leaving higher salaries on the table for you to chase after.

Obviously, this strategy has worked for ages, leading to more productive workers and less turnover.  Its just smart business, for the owner.  But for the worker, that comfort of guaranteed pay and benefits  can be dangerous because its temping enough to settle for.  To settle for a good lifestyle, instead of a great one.  The adventurous one we dream of.

Better to live an unstable life doing what you think is dope, than an elegantly paved one where you wake up each morning to do something you’d rather not do.  Simple concept, but it’s difficult to figure out the financial side of it, because its not easy to make money doing whatever it is that you think is dope… at first.  Ikenna hit it on the head. Thank you for that.

The first thing you should do if you feel like breaking free, is to start writing about it. Yes, start a blog. Get on YouTube and search for people doing what you are trying to get into.  Follow them. Don’t know how to start a blog? I didn’t either, and a friend told me about this online blogging academy, and how it got him into writing. I signed up for it, and I definitely wouldn’t be writing this if I hadn’t.  The videos really inspire you to write about your passions. It works wonders.

Writing about where you are, where you’ve been, and where you’re trying to go, realllly is a healthy thing.  For the mind, the soul, and the wallet. Yes, the wallet.  Because these videos won’t just teach you to write, but they teach you the skill of Internet Marketing.  No matter what you do, or where you’re trying to be, it is IMMENSELY valuable to know how to get yourself,  your cause, and your brand out to the world in a captivating way.  Market to the internet. Where billions of people hang out.

This was the first giant step for me. Because I have been a direct sales person for a long time, but it hit me, if I can get people to buy stuff from me Online,  that creates FREEDOM. Freedom to work when I want, and most importantly, where I want. Not chained to a regular schedule or an office – the WORLD is my office. That was a very powerful idea to me when I first joined internet marketing school.

I knew I wanted to travel as a lifestyle, but I didn’t pursue it because I didn’t know how to work virtually.  Four billion more people will come on the internet in the next ten years, and I’m very excited to start building a brand, online, around my passions – shooting videos, writing blogs, getting creative, interviewing inspirational people, entertaining the masses – getting my word out there through paid advertising, search engines and organic virality, to sustain a lifestyle of exploration and fun, that runs on my terms.

If you feel me, and would like to get in the game, and learn with us how to create sustainable cash-flow businesses on the internet, click on my link in the Start A Blog page, opt-in, sign up, and watch the videos. That’s all I did. It teaches you how to make online affiliate commissions right away.

Then you can start building your online portfolio of posts around what you’re trying to do. Tip: start emailing other bloggers who are into the same thing and comment on their blogs just to say that you are getting started and staying tuned. They love that stuff. Then once you have a little blog goin, you can bounce off ideas.  It’s all about reaching out randomly, though organically, and building connections.

Hey, the first step to building a world-class presence online is to get inspired and moved to get online (aka get on your damn computer), and start shaking things up, and it worked on me. [get online rant over].  Now watch Ikenna’s video.

YOU HAVE A CHOICE _ STOP PRETENDING  YOU DONT.

Subscribe Powerful Primates if you want more of whats good.

By the way, check out our video, boyzinthailand 2013 – phuket + bangkok + hong kong, and give it a thumbs up if you like it!

~Here’s to a life of abundance, awesomeness, and FUN.